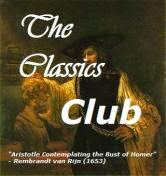 The participants are allowed to decide for themselves what they regard as a "classic". For me, any work of literature that has received considerable critical acclaim, is recognized internationally and/or has had a significant impact on literature of later generations is a classic. Therefore, my list of classics includes many very recent, but already widely recognized works. Many of these books are on The Guardian's list of '1000 novels everyone must read'. All of them are novels except for one collection of short stories and one play (I have a separate Shakespeare project of my own going on as well.)

For someone who reads with such a passion as me, making up a long-term reading list is a serious business. Alright, some books found their way on the list just because the title had a certain interesting word in it, or because my mother is always talking about that book. Mostly, though, I want to genuinely expand my reading horizons and achieve some personal aims. Here are some of my motivations:


So now you know why, how and when I'm going to go about this Classics Club project. Voilà, my list of 50 classic titles, all of which I'll be reading for the first time:

Mikhail Bulgakov:
6. The Master and Margarita

Wilkie Collins:
7. The Woman in White

Alexandre Dumas:
20. The Count of Monte Cristo
21. The Three Musketeers

Umberto Eco:
22: The Name of the Rose

William Faulkner:
23. The Sound and the Fury

William Golding:
28. Lord of the Flies

Victor Hugo:
29. The Hunchback of Notre-Dame

Harper Lee:
32. To Kill a Mockingbird

James A. Michener:
36. Tales of the South Pacific

Erich Maria Remarque:
40. All Quiet on the Western Front

John Steinbeck:
48. Of Mice and Men

The Classics Club seems like a great project for book-lovers in the Blogiverse, and it's nice to set yourself challenges and goals without restriction or stress. Let me know if you're joining in too!